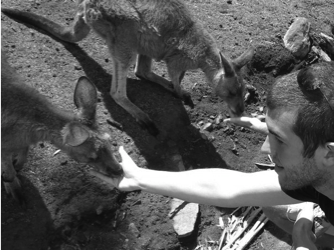 I was born in western Pennsylvania but grew up in West Virginia. I followed by grandfather's footsteps by obtaining my Bachelorate's Degree in Mechanical Engineering at the University of Delaware. During my undergraduate I undertook research projects for multiple professors mostly involving fuel cells. I also worked at the National Institute of Technology for a summer and competed in the SAMPE (Society for the Advancement of Material and Process Engineering) composite bridge manufacturing competition. At the University of Delaware I was also afforded the opportunity to study abroad in Greece and Australia.

The focus of my research is to investigate the high temperature mechanical properties of cobalt-based superalloys. Superalloys are defined as alloys which maintain their mechanical properties at high temperatures. The most prominent of these are primarily composed of nickel and are used most commonly as turbine blades in electric power production and jet propulsion. It was recently discovered that cobalt could be processed to exhibit superalloy properties. These new Co alloys have been shown to have higher melting temperatures than nickel and therefore can operate at higher thermal efficiencies in heat engines. Increased efficiency in the electric power production and aerospace industry represents significant savings business costs and will help to reduce in environmental pollution.